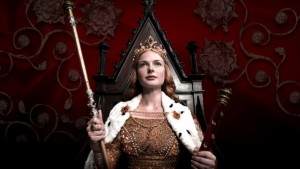 At their TCA session today, Starz announced that international acquisition The White Queen will get an early start, as its series premiere is set to air after the season finale of Magic City. The 10-episode limited series, which stars the likes of Rebecca Ferguson, Max Irons, and Janet McTeer, takes place in 1464 England, a country torn almost completely in half by the rivalry between the House of York and House of Lancaster. While the Yorks have managed to seize the throne, thanks to Kingmaker Lord Chadwick and charismatic new King Edward IV, that all may change when young Edward falls in love with a Lancastrian to the chagrin of his family. The series premiere will repeat on Saturday, August 10th at 8:00, with all future episodes airing at 9:00.

The network also revealed that they’ve acquired five-episode miniseries Dancing on the Edge, which will premiere this October. Starring Chiwetel Ejiofor, Matthew Goode, John Goodman, and Jacqueline Bisset, the period drama, set in the 1930s, was inspired by accounts of the prolific Duke Ellington Band’s mingling with the future Duke of Windsor Edward VIII in Europe. The story follows the Louis Lester Band as they play the London scene and build up a name for themselves among the aristocrats, who then introduce them to the type of posh living that they wouldn’t have otherwise been exposed to. But that good will and progressive thinking might come to an end when one of the band members is entangled in a murder conspiracy meant to bring the band down. Can the other members of the Louis Lester Band clear the name of one of their own and continue their march toward stardom?

Will you be watching The White Queen? Would something like Dancing on the Edge make for an interesting on-going series? Should networks like Starz go after more international miniseries and on-going series?