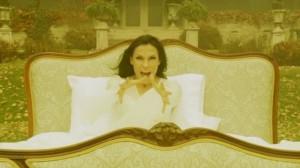 Netflix has announced that Hemlock Grove has been renewed for a second season. The next 10 installments of the mystery, set to premiere in 2014, will continue the story of a small Pennsylvania town dealing with strange happenings and recovering from the death of one of their own. The show also focuses on the friendship between blue blood Roman Godfrey and gypsy outsider Peter Rumancek.

“The worldwide fan response to Hemlock Grove was phenomenal,” said executive producer Eli Roth. “Netflix members loved the potent combination of sexy monsters, mystery, and the dark family soap opera that ended with a huge twist, leaving audiences worldwide totally shocked. Season One was just a warm up for what we have in store for season two.  Get ready to be scared in ways you never expected.”

The show joins fellow Netflix original House of Cards in making it to a second season, though the Kevin Spacey political thriller had two seasons commissioned before season one aired and Hemlock‘s episode order has been cut from 13 to 10. The streaming service has yet to release exact viewing totals for Hemlock Grove, meaning that a statement claiming that the show had more first weekend viewers than House of Cards is to be taken with a grain of salt until said numbers are made public.

Netflix will next debut Jenji Kohan’s hour-long comedic drama Orange Is the New Black on July 11th, its latest attempt at building up a slate of scripted series. Aside from House of Cards and Hemlock Grove, the company made a revival of Arrested Development possible by greenlighting and eventually debuting a fourth season of the cult comedy this past May.

What did you think of the first season of Hemlock Grove? Where would you like to see the show go in its next 10 episodes? Are you looking forward to seeing Peter and Roman’s friendship continue to develop?