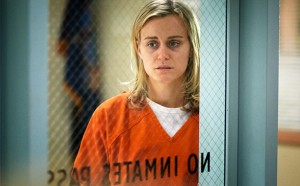 Based on the bestselling memoir by Piper Kerman and adapted by Jenji Kohan (Weeds), Orange Is the New Black follows engaged Brooklynite Piper Chapman, who is convicted of drug smuggling and money laundering and sentenced to 15 months in federal penitentiary. Once the prototypical All-American Girl, Piper has to quickly learn the cultural norms of the facility she’s housed in and how to fill the time she’ll be serving, all the while trying to keep her relationship with her fiancee afloat and retain some sense of herself while in a place she never thought she would be.

The show is the fourth original series to hit Netflix this year, as Kevin Spacey’s political thriller House of Cards, Eli Roth’s Hemlock Grove, and the return of Arrested Development have already made their debuts. It should be interesting to see how the show is received not only critically but commercially, as House of Cards garnered hype by being the first scripted series produced solely for Netflix and the long road back for Arrested Development resulted in a Memorial Day weekend binge that accounted for quite a bit of bandwidth usage. Orange Is the New Black, a comedic drama not unlike Kohan’s best-known project, won’t have either the buzz of being the first, being a Hollywood director’s project, or being a revival, so this should be Netflix’s first big test as far as scripted programming goes. If the show manages to keep the momentum going and draws a strong enough audience, it will validate the streaming service’s decision to focus so heavily on creating new material, but if Orange Is the New Black disappoints, questions might begin to arise.

The entirety of Orange Is the New Black will be available July 11th on Netflix.

Will you be watching Orange Is the New Black? Does the show look more comedic than what you were expecting? How do you think Netflix has done with regards to original programming thus far?