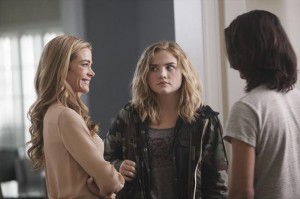 16-year-old Danny Desai wasn’t exactly the type of kid you expected to end up in juvenile hall. He came from a fairly well-off family that provided him with countless opportunities, his school performance was solid enough to suggest potential to become something, and his temperament never indicated any emotional or psychological problems that could have facilitated what he did. However, despite having a pretty decent set-up for himself, Danny killed his aunt when he was 11 years old, an act that shook his family (and hometown) to the core. It’s the type of act that will linger in the air and on the mind for years to come, but rather than finding a new place to go and start life over without the stigma of being “that kid who killed his aunt”, Danny has returned to his hometown on the series premiere of ABC Family’s Twisted.

As you might expect, his reemergence is something that doesn’t exactly earn him a whole fleet of new friends and admirers. The town had done what it could to put what he did out of its collective conscience and now, old wounds have been reopened and the pain that he caused feels as fresh as it did back then. School, in particular, will be a major hurdle for him to overcome, seeing as how his peers don’t know whether to bully him, pity him, or freeze him out in hopes of driving him away for good. Not even Danny’s old best friends, tomboy Jo and popular Lacey, know how to receive their former friend – they don’t know why Danny killed his aunt and the two haven’t been in contact with him since he left for juvenile hall. However, when someone in town turns up dead, Danny instantly becomes the prime suspect and they might be the only thing that can keep him out of another stint behind bars. Will Jo and Lacey still see the Danny they once knew in the Danny that stands before them today?

The series premiere of Twisted airs Tuesday at 9:00 on ABC Family.

Will you be watching Twisted? Is Danny going to be able to get anyone in town to believe he’s innocent? Why do you think that he killed his aunt in the first place?