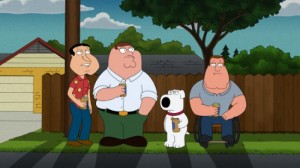 FOX has become the second network to reveal full synopses for each season finale it will be airing in the coming weeks. The network will be running four extended finales, with the reveal of the next American Idol taking until 10:07 on Thursday, May 16th, while three animated shows (The Cleveland Show, The Simpsons, and Family Guy) close out their seasons with back-to-back-to-back one-hour finales. Ratings grabber The Following, meanwhile, is set to bow out before May, though it’s already been renewed for a second season.

Which FOX finales will you be watching? Is there a particular guest star that you’re excited to see? What do you think about the network’s decision-making over when to end each series?

Monday, April 29th
8:00 Bones – “The Secret in the Siege”
When evil tech genius Christopher Pelant (guest star Andrew Leeds) returns to toy with the Jeffersonian team in their newest investigation, they discover a string of murders tied to FBI agents close to Booth (David Boreanaz). Meanwhile, as the investigation unfolds, Sweets (John Francis Daley) realizes that the evidence seems all too familiar to him, and Brennan (Emily Deschanel) starts evaluating her relationship with Booth as signs begin to point to him as a potential target of Pelant’s.

Monday, May 6th
8:00 Fox Special: Rihanna 777
Global superstar Rihanna soars in the exclusive world premiere of concert documentary RIHANNA 777, giving viewers a behind-the-scenes look at her unprecedented globetrotting concert tour that hit seven countries in seven days with seven shows to promote her seventh album, “Unapologetic.” The film provides fans with stellar performances of Rihanna’s greatest hits in exotic locales, as well as an inside look at the singer’s ambitious and often turbulent tour.

Thursday, May 9th
9:00 Glee – “All or Nothing”
The members of New Directions travel to Regionals. But the competition gets tough when they go head-to-head with the Hoosierdaddies and lead singer Frida Romero (guest star Jessica Sanchez). Meanwhile, Rachel finds out if she gets the callback for “Funny Girl” on Broadway.

Friday, May 10th
8:00 Kitchen Nightmares
Chef Ramsay heads to Scottsdale, AZ, to visit Amy’s Baking Company, which might be one of the cleanest restaurants in the history of the show. Cleanliness aside, Ramsay and the patrons find a number of issues with the food and service. Owners Amy and Samy refuse to pay attention to any critiques, but will this duo listen to Chef Ramsay, or force him to walk away?

9:00 Touch – “Leviathan”
As Aster Corps closes in on the completion of the number sequence that could catapult them to the top of the global economy, Farington endangers her two newest test subjects – Jake and Amelia (Saxon Sharbino). Martin and Trevor race against time to save them before they are killed and Aster Corps changes the world forever.

Sunday, May 12th
8:30 Bob’s Burgers – “The Unnatural”
Gene (Eugene Mirman) signs up for the baseball team, and Tina gets hooked on espressos in the third season finale of Bob’s Burgers.

9:30 American Dad – “Da Flippity Flop”
Klaus (Dee Bradley Baker) discovers his original human body, but Stan refuses to help him switch back. So, Klaus steals Stan’s body and Stan becomes the fish. Meanwhile, Roger turns the attic into a gym, and tries to pressure Steve into a long-term membership.

Monday, May 13th
8:00 – 10:00 Hell’s Kitchen
In a two-hour special event, the remaining chefs compete to participate in a glamorous photo shoot and host an intimate dinner for distinguished members of the United States Army. Then, the chefs are challenged to design and execute their own dinner menus before one more chef is sent home.

Tuesday, May 14th
9:00 New Girl – “Elaine’s Big Day”
Cece’s wedding day finds Jess and Nick making a decision about their relationship. Meanwhile, Schmidt schemes with a typically overenthusiastic Winston to sabotage the nuptials, although a shocking announcement may be bigger than anything he plans. Taylor Swift and Rob Reiner guest-star.

9:30 The Mindy Project – “Take Me with You”
When Mindy decides to go to Haiti on a volunteer mission with Casey, Danny and his ex-wife, Christina, throw a party for them that they will never forget.

Wednesday, May 15th
8:00 American Idol
The two finalists take the stage to battle it out on the last performance show of the season at the NOKIA Theatre L.A. LIVE in Downtown Los Angeles. Plus Season 11 winner Phillip Phillips and Carly Rae Jepsen perform.

Thursday, May 16th
8:00 – 10:07 American Idol
The most anticipated night of the television season is finally here! On the second part of the two-night season finale, the Top 10 reunite on the stage one last time before host Ryan Seacrest reveals the newest American Idol.

8:00 The Simpsons – “The Saga of Carl Carlson”/”The Man Who Came to be Dinner” – One-Hour Finale
Homer, Moe, Lenny (Harry Shearer) and Carl (Hank Azaria) win the Springfield Lottery. But when Carl takes off to Iceland – his homeland – with all the winnings, the guys embark on a Nordic adventure to rescue the cash. Then, the Simpsons board the wrong ride on a trip to “Dizzneeland” and are transported through the galaxy to Kang and Kodos’ home planet, where the inhabitants try to eat Homer in a giant fondue.

9:00 Family Guy – “Road to Vegas”/”No Country Club for Old Men” – One-Hour Finale
Stewie and Brian use Stewie’s time machineto go to Las Vegas for a Bette Midler concert, but chaos ensues when the machine malfunctions and creates alt-versions of the pair: a “lucky” version and an “unlucky” one. Then, the Griffins are invited to join the prestigious Barrington Country Club and, of course, get thrown out.