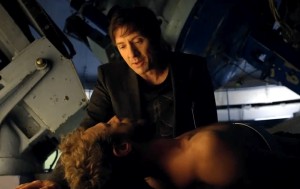 The return of Efa could have major implications for Bo’s search for her father. At one point, the succubus had given up hope, whether she outwardly admitted it or not, that she’d ever come in contact with him, perhaps out of fear that he’d end up being like her mother. However, since the Dawning, she’s become a more powerful Fae, possibly thanks to his influence. Efa would be able to, if not point her daughter in the direction of where to find her father, tell Bo about the man she came from: who he was, what parts of his personality she has, and what exactly happened to him. However, on the third season finale of Lost Girl, Efa’s not exactly in the mood for talking sense.

When Dyson tries to communicate with her, the impact that being held in captivity by Isaac is noticeable, but Efa does manage to confess her role in his capture. After bringing her back to life following her fall in the season one finale, Isaac demanded to know the strongest Fae out there, the who inspires both fear and admiration, and rather than saying Bo, Efa told him about Dyson. She knew that he gave up his wolf for Bo and would make that kind of sacrifice 100 times over to ensure her safety; while that might be true, her actions have gotten him to the brink of death, as Isaac will begin experimenting on him shortly to find out what makes Dyson so powerful and how he can extract that and implant it within himself. Will Bo be able to make it into the facility in time to save her girlfriend, her ex, and her mother?

Elsewhere on Lost Girl, Kenzi has an epiphany about Hale, while those Bo has left behind in hopes of saving Lauren and Dyson find themselves in a danger that they’ll have to get themselves out of.

The third season finale of Lost Girl airs Monday, April 22nd at 10:00 on Syfy. You can check out a recap of the most recent episode here.

How will Bo react to seeing Efa alive after all this time? What type of epiphany will Kenzi have about Hale? Will we see a casualty in the finale or will everyone make it to season 4?