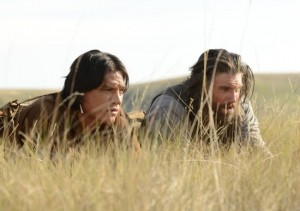 AMC has announced that troubled western Hell on Wheels is set to return for its third season on Saturday, August 3rd at 9:00. The season, which will take place in the year 1867 and finds Bohannon investing in the new American landscape, will be led into by a series of newly acquired classic westerns, including El Dorado, The Man Who Shot Liberty Vance, and The Shootist. It’s an intriguing move by the network that could be looked at in several ways; you could view the move as a burn-off of a series that has had showrunner trouble, an innovative way of potentially opening up a new night to original scripted programming, a symptom of a network having too many shows for too few slots, or a vote of confidence that the steadily rated drama can survive outside the clogged Sunday night lineup.

“A new episode of Hell On Wheels on Saturday night after a full day of western fan favorites is going to be like the saddle on top of the horse,” said Charlie Collier, President and General Manager, AMC. “This is a programmer’s dream – to have a genre specific, 14-hour lead-in to one of your highest rated originals. We are so excited about this opportunity to entertain AMC’s audience in a new way.”

“Hell On Wheels showrunner, John Wirth, says the new season “will be a western about work — the building of the railroad, the binding of the nation after the Civil War, and the rehabilitation of the men who lived and fought their way through those exploits. This season we’re placing Cullen Bohannon at the center of the show, and taking him away from the revenge motive which propelled him into the series.” He continues, “AMC has raised the bar for television dramas, they’ve set the gold standard. There’s nothing else like this on television.”

Hell on Wheels was the second highest series launch in AMC history and was also a top 20 program for engagement among age 25-54 (IAG) for the broadcast season for 2011-2012. The series’ second season wrapped in October 2012 with an average of 2.4 million total viewers and 3.2 million viewers with Live plus 7.

Will you be watching Hell on Wheels this season? Is AMC making a smart move by airing it on Saturday? If the show is successful on its new night, could you see more cable dramas making the shift to the forgotten ngiht?