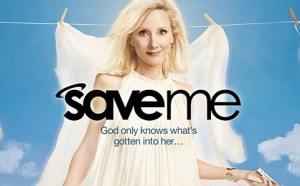 NBC has officially announced premiere dates for several series on its summer schedule. Kicking things off will be the Anne Heche comedy Save Me, about a Midwestern mom and wife who undergoes a spiritual awakening after suffering a near-death experience. The show, originally slated to have 13 episodes in its first season and coming off of showrunner turnover, will debut on Thursday, May 23rd at 8:00 with back-to-back episodes.

After the previously announced June 4th premiere of revamped America’s Got Talent, the next season premiere is American Ninja Warrior, which returns to the network on Monday, July 1st at 8:00. The competition series is set to have a two-hour premiere before sliding back to a one-hour installment the following week, leading into the debut of Get Out Alive with Bear Grylls. The series features Grylls, a world-renowned survivalist, leads a non-stop extreme-survival journey that tests 10 teams of two beyond their wildest imaginations.

Finally, scripted drama Camp is scheduled to premiere Wednesday, July 10th at 10:00. Starring Rachel Griffiths, it follows the campers and counselors at Little Otter Family Camp, including the divorced camp director looking for a fresh start.

Not being granted a spot on the summer schedule are international co-productions Crossbones and Dracula, indicating that each may be headed for a spot on the 2013-2014 schedule. NBC will unveil its schedule for next season on Monday, May 13th, the first of the five major networks to release their plans for the fall.

What will you be watching on NBC this summer? Do you think that Crossbones and Dracula will be saved for next season? Should the networks continue to infuse their summer schedules with original scripted programming?