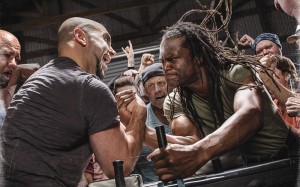 AMC has announced that reality competition series Game of Arms has been renewed for a 10-episode second season.

“With its cinematic look, raw intensity, and fascinating view of a little-known subculture, Game of Arms has become a defining unscripted series for AMC,” said Eliot Goldberg, AMC’s senior vice president of unscripted programming.  “Undertow Films delivered a visually stunning first season and we are thrilled to continue to explore these fascinating characters and rivalries in season two.”

Averaging nearly 750,000 total viewers in L+7 numbers, Game of Arms follows members of various regional arm-wrestling clubs, with the focus of the series being the preparation that goes into competitive arm-wrestling, the grueling matches that competitors are forced to endure, and the sacrifices that the club members make in the pursuit of victory. The second season order for Game of Arms comes after AMC ordered three new unscripted series for 2015: All-Star Celebrity Bowling, where two celebrity casts face off in a bowling match for charity; an untitled Billy Corgan wrestling docu-drama, where Corgan becomes the Creative Director of a Chicago wrestling league; and Visionaries, centered on the employees of Vision Scenery as they design and construct Hollywood sets, props, and commercial models.

Did you watch the first season of Game of Arms? What would you like to see out of a second season? What type of unscripted series should AMC be going after?