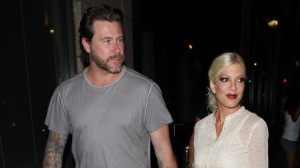 Lifetime has announced that the second season of Tori Spelling reality series True Tori will premiere Tuesday, October 21st at 9:00. Filming on the docu-drama begins today, with the season to focus on Spelling’s continued reconciliation with husband Dean McDermott.

Season two of True Tori is said to address Tori’s family relationships, business ventures, and struggles with balancing her four children, thriving career, and still-in-repair marriage. The series, which premiered earlier this year, over-delivered the Lifetime 2014 prime average by 74% with Women 25-54, 61% with Women 18-49, 57% with Adults 25-54, 47% with Adults 18-49, and 15% with Total Viewers.

Spelling has had a busy 2014 as, aside from True Tori, she starred in ABC Family comedy Mystery Girls alongside 90210 co-star Jennie Garth. The series has reportedly been cancelled after disappointing ratings for its first 10 episodes, though the network claims that no official decision has been made. Given that True Tori will be filming and airing in near-real time, viewers will get a chance to see how the fate of Mystery Girls, whether it be positive or negative, impacts Tori’s career, state of mind, and relationship with Dean.