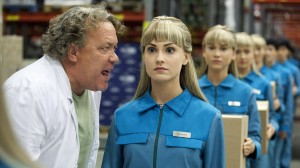 According to The Hollywood Reporter, AMC is nearing a deal to acquire the domestic rights to Xbox Studios drama Humans, a co-production between the video game giant and U.K. broadcaster Channel 4. Casting for the series is said to be underway.

From Sam Vincent and Jonathan Brackley (Spooks), Humans focuses on a world consumed by the latest tech innovation – synths, robotic servants who are eerily similar to their live counterpart. While the thought of making life easier and removing some of the weight from one’s subconscious is quite tempting, one family orders a synth and soon learns that what they save as far as workload might be outweighed by the fallout from bringing the synth into their home. The series is based on acclaimed Swedish drama Real Humans, which completed its 10-episode second season this past February.

Humans will be the second genre show on AMC following megahit The Walking Dead and joins fellow new drama Badlands on the network’s 2015 scripted slate. With Breaking Bad over and Mad Men heading out the door next year, AMC has been trying to find series capable of producing solid ratings and generating buzz, as the likes of Turn, Halt and Catch Fire, Low Winter Sun, and Rubicon have lacked in at least one area each. Currently, the network is heavy on crime dramas and historical fiction, so Humans could be just the show they need to expand their audience and remind critics of the adventurous development that wrought the likes of Breaking Bad and Mad Men.

You can check out a trailer for Real Humans below.

Will you be watching Humans? Do you think this is the project that’ll bring AMC the combination of strong ratings and strong critical notice that they haven’t had for a new series in a while? Would you like to see AMC continuing pursuing genre shows and lessen its presence in the worlds of crime dramas and historical fiction?