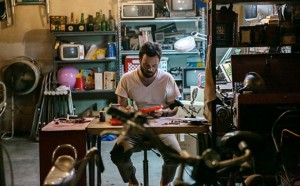 AMC has announced that upcoming drama Halt and Catch Fire is set to premiere Sunday, June 1st at 10:00. The series, which will have Jonathan Lisco (Southland) as showrunner, tells the story of the rise of the PC era in the early 1980s through the eyes of an unlikely trio looking to build a computer that will change the world. Halt and Catch Fire will have its world premiere Saturday, March 8th at 11:00 a.m. during the film portion SXSW in Austin.

The series will be the second new drama to premiere on AMC this year, as it will assume the Sundays at 10:00 slot from fellow freshman period piece Turn and precede the November premiere of Breaking Bad spin-off Better Call Saul. More interestingly, Halt and Catch Fire won’t be the only tech-heavy scripted series to make its premiere on cable this year, with HBO comedy Silicon Valley set to bow this coming April. It already has a decent amount of pressure on its shoulders due to AMC needing to find another buzzy drama hit after the cancellation of The Killing, the conclusion of Breaking Bad, the impending conclusion of Mad Men, and the Saturday-ification of Hell on Wheels, so the looming presence of Saul Goodman and the possibility of being beaten to the punch by Silicon Valley will make the show’s numbers, and the standard in which AMC holds the show, all the more intriguing.

Will you be watching Halt and Catch Fire? What do you think the first trailer for the show will look like? Is this going to be a strong companion with Mad Men or are the two going to be too incompatible?