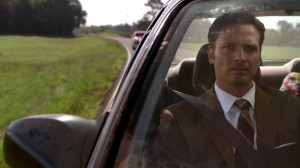 Sundance has announced that critically-acclaimed drama Rectify is set to premiere its second season on Thursday, June 19th at 9:00. The series, which stars Aden Young (Killer Elite) as a man released from prison after two decades on death row, picked up quite a bit of buzz when it debuted last spring, earning nominations at the Television Critics Association Awards, the Satellite Awards, and the Critics’ Choice Television Awards.

Sarah Barnett, Sundance Channel President and GM, stated, “The response to Rectify has been incredible. We feel as though this story has tapped into something truly unique, with both critics and audiences using their platforms to share such strong, personal reactions to this very distinctive TV series. There’s so much drama and character that’s been set up in the first season, it will be electrifying to see where Rectify goes in season two.”

Rectify‘s slow burn storytelling and decidedly quiet atmosphere make it an interesting candidate for a summer premiere; getting a show like this away from the glut of spring programming in favor of launching louder shows is a smart idea, but Rectify is a show that doesn’t feel like it should air in the summer and it’ll be telling if the show can gather some ratings momentum with lessened competition or if it finds itself in something of a sophomore slump. Additionally, Sundance has tried to make Thursdays its night for original programming in recent months, having launched both The Red Road and The Returned there, and Rectify‘s ratings could be impacted by the move from Monday nights, where it aired its first season.

Will you be watching Rectify this season? Should the show have moved from its spring time slot to the beginning of the summer? What do you expect to happen to Daniel during season two?