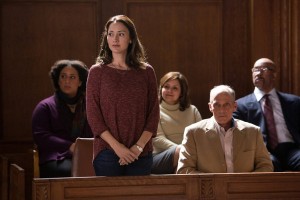 In the world of Grimm, the Wesen are all around. They’re your teachers, your shop owners, your detectives – they’re your mothers, your brothers, your best friends. Without anyone catching on, the Wesen have managed to infiltrate all aspects of society and while most tend to keep to themselves for fear of detection, others aren’t quite as careful. After dealing with the trio of bank robbers who used their true identity to commit their crimes, are Nick and Hank ready for another Wesen threatening his people all in the name of financial gain?

On the next episode of Grimm, Rosalee is on jury duty for a case with a Ziegevolk defense attorney who is using his powers to sway the jury in his favor. Once he eats a toad in the bathroom, he gets a psycho-hallucinogenic influence over people, which he’s been using to win cases, build his reputation, and move up the ladder at his firm. The fact that the Ziegevolk was trying to bend Rosalee to his whims, along with the rest of the jury, will make the case more personal for Nick, Hank, and Monroe, placing greater importance on getting him arrested and out of the general population. Not only is he targeting someone from their camp, he’s placing the Wesen community as a whole in danger, which could lead to others being found out and innocents being lost all due to the greed of one man.

Elsewhere on Grimm, Captain Renard brings Nick and Hank in on his recent dealings with the Verrat, while Juliette returns to the trailer and finds her memories becoming clearer.

How will Nick and Hank stop the Ziegevolk from using people to advance his career? Is Captain Renard smart in confiding in someone about the Verrat? Will this be the episode where Juliette’s memory returns completely?