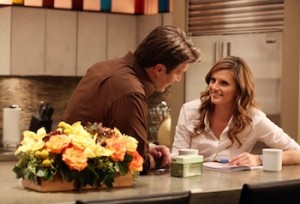 Castle is back!! You have no idea how happy that makes me. The five week hiatus was a killer but thank goodness for Castle dvds to keep me occupied. So let’s jump right into this, shall we?

“Significant Others” saw the return of the deep fried twinkie, otherwise known as Meredith, Rick’s ex wife. I’ll admit, I was a little scared what this would mean for Castle and Beckett but I was willing not to speculate so much during the hiatus. All in all I loved the episode. It was fun, had angst, and it kept me on my toes.

The case of the week was really entertaining and kept me guessing right until the very end. When a divorce attorney to the rich and famous, Michelle Twohey gets murdered with an ice pick, that’ll sure peak my interest. Nancy Lee Grahn guest starred as one of the clients of the murdered divorce lawyer. I could not stop laughing during her scene as she and her ex husband were breaking valuable pieces of art. I just love seeing daytime stars on primetime shows, especially Nancy. She’s one of my favourites. Jack Wagner also guest starred as Billy Piper, a professional golfer. Billy’s career went down in flames after his wife filed for divorce and turned up dead after a boating accident. Turns out, Michelle Twohey was his ex Leanne’s divorce attorney. Michelle was looking into the accident after she came across some very interesting evidence. Turns out Billy’s wife faked her own death with the help of Walter, Nancy Lee Grahn’s character’s ex. Leanne faked her own death to get away from Billy. Michelle figured this all out and of course Leanne had to kill her.

Castle was left squirming pretty much the whole episode after he let Meredith stay at the loft to look after Alexis after she got mono. Beckett was also staying at the loft because her place was being fumigated. Meredith staying there actually served a purpose. Feisty Beckett emerged and we got to see her annoyed at Castle which I didn’t blame Beckett one bit. I would be extremely annoyed if my boyfriend let his ex wife stay with us. I just loved when Castle was trying to tell Meredith he didn’t think her staying with them was a good idea and she wasn’t giving him an opening. I truly believe she was manipulating him.

Beckett wasn’t the only one was feisty this episode. Lanie was quite spirited but I had to agree with her. “This is war girl, and guess who’s losing?” She might have been pouring more fuel on the fire but I’m sure Kate was thinking the same thing. I love Beckett and Lanie girl talk scenes and I wish we got more, so I’ll take what I can get.

Best line of the night had to be Beckett to Castle, “Button up Kitten, we’re going home.” A part of me squealed that she said home, instead of Castle’s loft.

My jaw dropping moment was when Meredith came downstairs in a t shirt and her underwear. I think the exact words to come out of my mouth were, “Oh, hell no!”  I can’t even imagine how Beckett felt sitting across from a half naked Meredith. Can you say, awkward?  The best was Meredith calling up Beckett and inviting her out for dinner. Beckett couldn’t even say no to Meredith. What is it about Meredith that people can’t say no? Castle’s two worlds were starting to collide! Oh! and that look Kate gave Castle after the comparing notes talk. Priceless! Top 5 Beckett look for sure!

I so wish we could have seen that dinner scene between Kate and Meredith. It appeared that the dinner went great and we got both ladies teasing Castle when they got back to the loft. The infamous “You’re not the man that I thought I knew” line that drove the fandom nuts for weeks was just a joke from Beckett. The truth is, I also freaked out a bit after seeing that in the promo, but after cooler heads prevailed I knew it would be taken out of context. We did get a sweet Caskett moment after the dinner. I loved that it what Beckett that wrapped her arms around Castle and initiated that kiss. A kiss in bad lighting but I’ll take it. I don’t want to sound like a perve but could we please get a Caskett love scene or even a kiss in good lighting? I think we deserve it.

Meredith and Beckett’s conversation at the end of the episode actually had me in tears. I really hope Kate is not having doubts about her relationship. Rick has definitely grown as a person since meeting Beckett. I truly believe he’s not the same man that married Meredith some 15 years ago. I just hope the worry and sadness in Kate’s eyes will not ruin anything. How I wish Kate never asked why it didn’t work out with Meredith and Castle. It had to happen right? More angst for the future and a way of clearing a path for Castle’s backstory about his father. Castle and Beckett are strong and I’m sure when Castle is ready to open up to Beckett, he will. Look how long it took for Beckett to open up to Castle. Now it’ll be Beckett’s turn to tear down Castle’s walls. At first I thought maybe Meredith was playing with Kate but nobody’s that cruel, right? I’ll be honest, the last moments of the episode had me a bit worried but in Marlowe we trust, right?