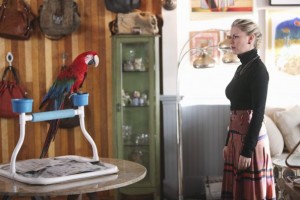 On the next episode of Happy Endings, Brad and Penny accidentally break one of Alex’s favorite childhood mementos and have to rush to put it back together before she returns home from a trip. They do manage to fix what they destroyed, only the glue fumes from their project proved to be too much for Tyler and killed Alex’s pet. As expected, the two immediately panic and attempt to come up with a plausible reason why Tyler would have died. They seem to settle on the bird, whose wings are clipped, attempting to fly out the window and then falling to his death, but can that really work? Will they be able to keep their cool long enough to pull this cover-up off?

Elsewhere on Happy Endings, Jane and Dave try to find the perfect match for Max, who has been feeling a little lonely and left out recently. Things ending with Grant might have ended cordially, but Max really took the break-up to heart, so much so that this will be his first time dating again since Grant. Even though Jane and Dave aren’t the best matchmakers, the act of getting back out there could be the best thing for him and make him more comfortable and confident with the idea of being with someone for the long-term.

Happy Endings returns from winter hiatus Sunday, January 6th at 10:00 on ABC, with another new episode airing in its regular Tuesday time slot. In place of new episodes of 666 Park Avenue, which was cancelled in November, ABC has opted to air original episodes of Happy Endings and Don’t Trust the B—- in Apartment 23 on Sundays for three weeks this month.

Can Brad and Penny cover up what they (inadvertently) did to Tyler? Should they have immediately confessed rather than coming up with an elaborate reason why Tyler died? Will Jane and Dave find a guy for Max?