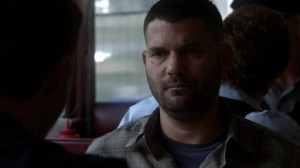 The winter finale of Scandal found Huck being arrested for his role in the shooting of the President. To free him from the clutches of the government and exonerate him of all charges, Olivia would have to put on one of the greatest performances of her career and Pope & Associates would have to work efficiently in order to quickly recover one of their own. However, when we return to the world of D.C. fixers and framed assassinations, Huck will have to go through a whole lot of hell to make it to the other side.

In a sneak peek from the winter premiere of Scandal, Huck is being held and forced to endure “enhanced interrogation techniques” meant to get him to confess to the crime and give up personal information. Much to the chagrin of acting President Langston and Hollis Doyle, he’s not yet come forth with anything and therefore, they can’t go ahead with their celebratory press conference that evening. Even David Rosen, who has been willing to go to extremes to procure information, isn’t comfortable to what Huck is being subjected to, but while he may exert a certain amount of influence around D.C., he’s screaming into the wind here. Huck will continue to be tortured until he divulges information or Olivia frees him from captivity.

Meanwhile, Verna confesses to Olivia that she’s the one responsible for Huck being arrested, due to the blackmail from Langston that would have severely damaged the judge’s credibility and reputation. It’s important that Olivia know where exactly all this came from and who was behind the arrest, which could help her help Huck much quicker; with Langston and Doyle behind the arrest, the cabal club might be imploding upon itself, particularly if it comes out that one of the two were responsible for framing Huck in the first place.

Do you think that Huck will reveal any information? Are you a supporter of “enhanced interrogation techniques”? Is Verna really responsible for the arrest?