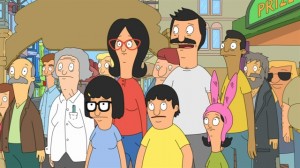 One of my favorite things about Bob’s Burgers is that they’re a family that you feel actually loves one another. Often on comedies about families, sniping and arguing are substituted in for warmth and genuineness, but here, the show manages to balance absurd humor with non-treacly reminders that Bob, Linda, Tina, Gene, and Louise all support and care for one another. It’s a refreshing change of pace in the current television environment and one that could stand to become the norm, but not every family gets along perfectly every second of the day and on the next Bob’s Burgers, there’s a conflict brewing between two of the Belchers.

Louise has kind of had enough of Linda and after the two have an argument on family game night, Linda decides to take the two of them to a mother-daughter seminar in order to learn how to appreciate one another. Louise, of course, isn’t buying it and shuns each gesture that Linda tries to make, including a collage hanging up in her room. The two are in no danger of having any major blow-up, but it’s still strange to see the two this disgruntled with one another; it could be due to Louise getting older and being on the edge of pre-teendom, or there might be an underlying issue that she (surprisingly) has yet to address until now.

Meanwhile, Tina has taken another step toward adulthood when she begins wanting to shave her legs, thanks to overhearing two popular girls making fun of another girl for having hairy legs. However, she doesn’t want to do it alone and enlists Linda to help her, only for her mother to become too involved in the conflict with Louise and disappear. In steps Bob to help out, only he doesn’t exactly have a lot of experience in manners like this. But will this help him bond with Tina and accept that his little girl is growing up?

Bob’s Burgers returns from winter hiatus Sunday, January 6th at 8:30. It was announced yesterday that the show would be shifting to 9:30 for three weeks in March.

Will Tina be able to shave her legs and show off to the popular girls? Can Linda and Louise mend their relationship thanks to the seminar? How will Bob and Gene handle the drama?