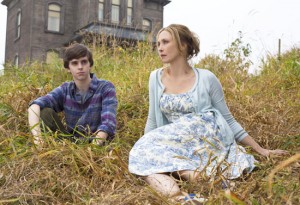 A&E has announced a premiere date for their next original scripted series. From Carlton Cuse (Lost) and Kerry Ehrin (Friday Night Lights) and premiering Monday, March 18th at 10:00, Bates Motel is a prequel to the 1960 horror classic Psycho and follows a teenage Norman Bates (Freddie Highmore). Once his father dies, his mother Norma (Vera Farmiga) buys a motel in another town looking for a fresh start, but rather than a clean slate, the Bates family finds a town built on secrets and brimming with hushed whispers. Could Norma and Norman potentially be in danger, were they to get too close and find too much out about the sleepy town they now call “home”?

The two already had an unusually close relationship, so now that they’re on their own in a town that will do anything it can to reject and isolate them, they’ll have to lean on each other for support that much more. However, the basis of Bates Motel is the unraveling of Norman’s psyche and how dark he ultimately goes during his formative years; as much support as he may receive from his mother, it won’t be enough to keep him from turning into the man we meet in Psycho. Rather, it likely contributed to the downfall of the Norman that once was, since he becomes too psychologically and emotionally entwined with Norma to function as a normal adult.

It’ll be interesting to see just how dark the show allows Norman to go and the journey that they take to get him from shy, overprotected Norman to the deeply disturbed Norman found in Psycho. Although he and Norma might be outsiders in peril upon moving to White Pine Bay, it turns out that the residents of the small town are in more danger than they expected from the quiet boy with the dark eyes who lives in the creepy motel.

Will you be watching Bates Motel when it premieres this spring? Do you think that Highmore can capture the essence of such an iconic film character? How deep do you want the show to delve into Norman’s psyche?