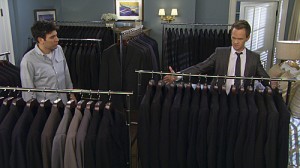 Well if tonight’s wasn’t the most intriguing How I Met Your Mother, I don’t know what is.

Flashforward to the year 2024 and Ted and the Mother are back at the Farhampton Inn for some time away from the kids.  The snowstorm outside prompts Ted to share the story of the worst snowstorm ever…several times, but the Mother knows them all.  Apparently this is a great thing for them as they’ve finally reached the status of “old married couple,” as they both know all of the other’s stories.  Curtis arrives – still working at the Inn – and mentions a past visit in which a lamp was broken, leading us to the meat of tonight’s story – a story, says Ted, that is laced with “intrigue, betrayal…and lamps.”

To cut straight to Ted’s point, the lamp gets broken while Robin is relaxing via playing indoor hockey with her sister Katie (Lucy Hale returns to the role).  But the reason why Robin is so set on playing hockey and watching “The Wedding Bride, Too” – a film made by Stella’s husband – is a little more of an irritant to Lily than everyone else.  Lily can’t stand that Robin isn’t excited, or even nervous, about it being her wedding day.  She attempts to get Robin to crack by putting on her own wedding dress and threatening to wear it to the wedding.  (Really she just brought it to re-do hers and Marshall’s own awful photos).

Things get real when they all acknowledge that it may be the last time all five of them will be together – as Ted is moving to Chicago the next morning.  It becomes clear to them all that sometimes, it’s best to not to even mention the things we don’t want to think about or deal with…like leaving all of our friends behind.

Lily resides to be content with Robin’s not making a big deal out of it being her wedding morning, yet, Robin’s “holy crap this is my wedding moment” finally comes when she leaves the room to get ice and runs into her mother.

The fact that this episode was told in a flashback between Ted and the Mother added an interesting emotional angle to the episode.  Particularly because it brought even more light to the widely popular theory that the reason Ted is even telling his kids how he met their mother is because she’s dead. “I love your yarns,” the Mother says. “I hope you never stop spinning them. You’re the love of my life, pooh bear. I just worry about you. I don’t want you to be the guy who lives in his stories. Life only moves forward.”  The theory is further fueled when the Mother remarks “What mother is going to miss her daughter’s wedding?” and Ted tears up.

That’s not to say that I hold much stock in the theory.  While such foreshadowing exists, I would not put it past the HIMYM writers to completely spin the story in a different direction come the finale.

The episode weight was lifted a bit by the B-plot of Barney trying to pick a suit for the big day.  Ted initially thinks that his friend is having a pre-marital affair when he spots Barney slipping into a room, but gets a truly Barney-esque shock when he finds that the room is full of suits.  He has to talk his friend into picking one – the right one – custom made for his wedding day by Tim Gunn, which makes for an amusing, touching scene between two bros.

“Vesuvius” was a great transition episode as we move into the home stretch for the season, and the series.  There is clearly a shift going on to the more serious stories and how our favorite five friends are going to handle things.  And let’s remember – Ted still has to actually meet the mother, not just hear her singing from the room next door.

What did you think of tonight’s How I Met Your Mother?

Oh!  And, can we give a round of applause for the retur of Swarley?