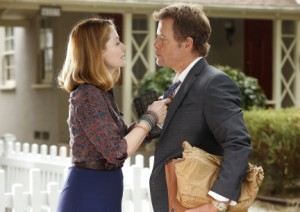 In yet another midseason move by FOX, struggling freshman dramedy Rake has officially been bounced to Fridays, where it will air out the remainder of its 13-episode order beginning March 14th at 8:00. The series, which stars Greg Kinnear, will lead into new episodes of Enlisted and Raising Hope. Premiering on Thursday, March 13th at 8:00 is the next season of Hell’s Kitchen, which will oust the American Idol results show from its time slot and move that now 30-minute schedule filler to 9:00. Christopher Meloni comedy Surviving Jack will still follow the Idol results show, this time at 9:30, and premiere March 27th.

It’s a series of understandable moves for FOX, which couldn’t handle Rake’s ratings another week in an important slot and needed the late-season stability that comes from any of their Gordon Ramsey-fronted series. However, using it to lead into American Idol indicates a lack of confidence in the venerable talent competition and Surviving Jack might pay the price, as it’s now effectively on its own; the network possibly should have hammocked it between Idol and Hell’s Kitchen, particularly if Idol is vulnerable come late spring. This is also another harsh blow to the chances of Enlisted and Raising Hope, which had been bandied about as a potential Thursday replacement for Rake. The former comedy would have gotten its greatest sampling yet on a heavily trafficked night, but instead, it’s gone from having sturdy Bones as a lead-in to the lowest-rated drama on the network.

FOX has made a series of scheduling moves this midseason, yet every night on their schedule is shaky at best. The Following is down; Glee is putting up numbers that make the network regret giving it a two-season renewal last year; New Girl and Brooklyn Nine-Nine have deflated since the Super Bowl; American Idol is down; Rake was a non-starter; and both Enlisted and Raising Hope had no shot airing on a Friday. This move might get them to the end of the season in one piece, but how will they look this time next season?

Did FOX pick the right replacement for Rake? Do you think Surviving Jack has a chance to find an audience? Should the network have used Hell’s Kitchen on Fridays and something else on Thursdays?