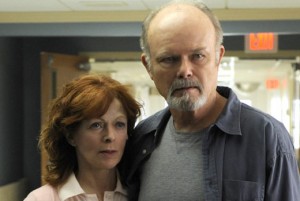 ABC has released four new promos for upcoming family drama Resurrection. The series, based on the novel “The Returned” by Jason Mott, tells the story of residents of a small Missouri town dealing with their loved ones returning from the dead, a similar premise to last year’s The Returned, which aired on Sundance. In both series, the mystery of why (and how) those who return from the dead came back soon envelopes their respective towns, causing a mixture of fear, paranoia, and heartache among the town residents.

Listed below are the dates, titles, and descriptions of the first two episodes of Resurrection.

Sunday, March 9th – “The Returned”
An 8-year-old American boy (Landon Gimenez) wakes up alone in a rice paddy in a rural Chinese province with no idea how he got there. Details start to emerge when the boy, who calls himself Jacob, recalls that his hometown is Arcadia, and an Immigration agent, J. Martin Bellamy (Omar Epps), takes him there. The home he claims as his own is occupied by a 60-year-old couple, Henry (Kurtwood Smith) and Lucille Langston (Frances Fisher), who lost their son, Jacob, more than 30 years ago.

Sunday, March 16th – “Unearth”
The Langstons, especially Sheriff Fred, are forced to confront secrets from their past they’d rather leave buried when Bellamy pushes to have Jacob’s tomb exhumed. Maggie agrees to help Bellamy in his investigation, and Pastor Tom reaches out to Jacob, his childhood friend. The Richards family adjusts to Caleb’s return, the second for Arcadia. But unlike Jacob, Caleb claims he has no memory of his death.

The series premiere of Resurrection airs Sunday, March 9th at 9:00 on ABC.

Will you be watching Resurrection? How do you think the newly released promos make the show look? Can the show escape the shadow of The Returned and find an audience on increasingly difficult Sundays?