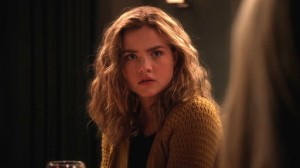 Now that Vikram’s body has been discovered in the woods, it’s only a matter of time before Danny’s involvement in and Jo’s presence at the accident are discovered, meaning that the former could go right back to being the town pariah after getting a reprieve upon Marilyn’s arrest. It also means that Jo, who tried to separate herself from Danny and the investigation into Regina’s murderer, would join her friend as a Green Grove outsider, permanently displaced rather than being let into the fold like she wants. With her fate in the town social structure up in the air, possibly in the same state as her legal situation, Jo will have to decide whether she wants to come clean or attempt to hide her knowledge of the accident in a fit of self-preservation. And does her life even include Danny going forward?

On the next episode of Twisted, Jo runs into Charlie at the diner the morning after the Homecoming dance. As much as she might view him as a welcome distraction from the chaos that her life has become recently, there’s the fact that he has a huge secret that Danny is keeping and that he seems to have targeted both her and Lacey upon his arrival in Green Grove. Him approaching her at the dance and working hard to make her smile was less about a budding attraction or finding somebody to spend time with and more about an ulterior motive, possibly revenge against Danny for something that happened while they were behind bars. Jo may need some type of comfort and refuge at a time when the walls are closing in on her, but in getting closer to Charlie, she’ll only make things more difficult for herself and put herself in more danger.

Elsewhere on Twisted, Kyle can’t quell his suspicions that Vik’s death isn’t what it seems, while the life insurance money drives a wedge between Danny and Karen and Jo confronts Tess about the tension between her parents.

Is Charlie’s overt creepiness a sign that he was the other person in the woods? Will Kyle figure out the reality of Vikram’s death? How will coming into the insurance money change the lives of Danny and Karen?