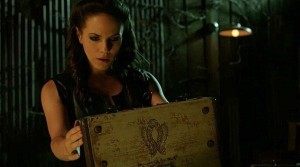 Much of this season of Lost Girl has found Bo struggling to return to her normal self. After being abducted by the Wanderer and having to dig into the black hole that is her memory, where her recollection of signing herself over to the dark is hiding, Bo hasn’t been able to be the succubus that she’s used to being; rather than acting as the sole protector of her loved ones, an untouchable entity in Fae society who has control over any situation and self-assurance in her abilities, she’s been a bit adrift, unable to come and go as she pleases and at a loss as to her place in the Fae world.

On the next episode of Lost Girl, Bo will get the chance that she needs to save her friends and find some semblance of normalcy when a time loop develops. Along with Tamsin, she’s the only hope in breaking the loop and restoring the status quo, except that when she approaches Trick, she receives a warning that he’s too afraid to help her find the Wanderer. As much as Bo needs to focus on finding the seam in the time loop, which will help her locate the sense of self that’s not been as readily available recently, there’s no doubt that this piece of knowledge about the Wanderer will stick with her and inform her actions for the rest of the season. For Trick to not want to divulge the Wanderer’s identity, it has to be either someone close to her or someone she doesn’t want to be involved in, but once Bo figures out a way to restore time to its normal state, she’s got to go after the Wanderer and find the answers to the questions that have haunted her since her return from the train.

Elsewhere on Lost Girl, Kenzi and Hale prepare to spend their first night together, while Lauren and Dyson disagree over what to do with a mysterious package.

How will Bo be able to stop the time loop? Will Kenzi and Hale’s first night together come to fruition? Who do you think the package will be from?