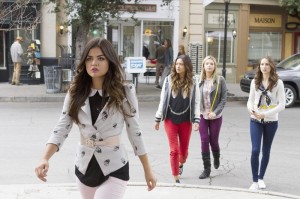 ABC Family has released descriptions for the winter premieres of Pretty Little Liars and Ravenswood. Now that Ali’s back, the Liars have a chance to find the answers that they were previously missing, but are they ready for the knowledge of who’s actually buried in their friend’s grave? Meanwhile, the group at Ravenswood continues to struggle with the paranormal events that have happened recently, events that have put all of their lives in danger. Just how close will Caleb, Olivia, Luke, Miranda, and Remy get to figuring things out before whatever they’re chasing decides that they need to be stopped in their tracks?

Listed below are the titles and descriptions of the winter premieres of Pretty Little Liars and Ravenswood.

Pretty Little Liars – “Who’s in the Box?”
Trying to put the pieces together Hanna comes up with the idea that if they find out who is really buried in Ali’s grave it may lead to much needed answers. But as the girls search, Emily has trouble dealing with how she feels about Alison being alive. Meanwhile, Caleb returns to Rosewood, and Ezra has clandestine meetings with Mona and Aria.

Ravenswood – “Revival”
Fresh off his trip to Rosewood, Caleb struggles to deal with the aftermath of his brief time with Miranda on the other side.  Remy realizes her dreams may be the best clue they have into understanding the pact, but she unwittingly attracts something that is determined to make sure Remy doesn’t wake up.  And Miranda decides to haunt Mrs. Grunwald for answers but discovers Grunwald may have a ghostly friend of her own. Meanwhile, Luke and Olivia are unnerved by Collins’ increasing attention towards their mother, and Olivia makes a major decision about Dillon, without realizing his true motivations.

The winter premiere of Pretty Little Liars is set to air Tuesday, January 7th at 8:00, with Ravenswood returning to finish out its initial 10-episode order at 9:00. You can check out a preview of Ravenswood’s winter premiere here.

Who do you think is really buried in Ali’s grave? What will we find out from Ezra’s meetings with Mona and Aria? Why is Collins focusing so much attention on Rochelle?