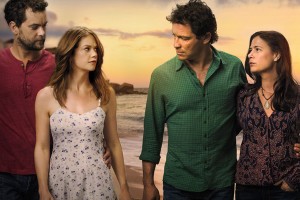 Showtime has released a behind the scenes look at upcoming relationship drama The Affair.

Created by playwright Sarah Treem and Hagai Levi (In Treatment), The Affair follows two marriages as they deal with revelations of infidelity. When history teacher Noah (Dominic West) decided to bring his family to the Hamptons for the summer, he thought that he would have a relaxing few months of sun, sand, and writing his novel. However, when he meets Alison (Ruth Wilson), a waitress recovering from a recent tragedy, he discovers something that was missing from his marriage and slowly builds a relationship with her as a result. But what kind of fallout will dgfev online casino there be when Noah and Alison decide to pursue the obvious connection between them?

In addition to West and Wilson, The Affair stars Maura Tierney (Rescue Me) as Noah”s wife Helen and Joshua Jackson (Fringe) as Alison”s husband Cole. The series will be executive produced by the likes of Eric Overmeyer (Treme, The Wire) and Jeffrey Reiner (Friday Night Lights).

The Affair is set to premiere Sunday, October 12th at 10:00 on Showtime. You can check out an additional trailer here, as well as the official key art for the series here.

Will you be watching The Affair? What kind of fallout do you think Noah and Alison will face from their relationship? Will either come to regret stepping outside of their marriage and pursuing what they thought they were missing?