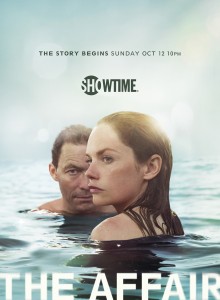 Showtime has released another trailer, as well as the first piece of official key art, for upcoming relationship drama The Affair.

Created by playwright Sarah Treem and Hagai Levi (In Treatment), with Eric Overmeyer (The Wire) and Jeffrey Reiner (Friday Night Lights) acting as executive producers, The Affair follows the impact that marital indiscretions have on two separate relationships. When history teacher Noah (Dominic West) took his family to the Hamptons for the summer, he didn’t expect to fall for someone, but that’s what happened when he met waitress Alison (Ruth Wilson), a woman still recovering from a recent tragedy. The two tentatively form a connection and find that the other has what they’re missing from their current spouses, but they soon discover that the decision to enter into this relationship will have fallout that neither of them could have predicted.

The series premiere of The Affair is set to premiere Sunday, October 12th at 10:00 on Showtime. You can check out an additional teaser for the series here, as well as a full version of the key art here.

Will you be watching The Affair? Does this new trailer give you a better feel of what The Affair will be like? How do you think a show with this type of premise can extend itself for multiple seasons?