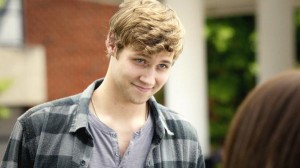 After years of trying to be perfect, both from her own expectations and what she thought other people were expecting of her, Taylor finally allowed herself to cut loose and ended up making out with three guys at Bird’s party. It was a liberating time for Taylor and something that impressed Carter, to boot, but what she didn’t realize before getting into the world of dating, kissing, and boys is that things get complicated very quickly. While she got the chance to lose her kissing virginity and show out for Carter’s friends, finally feeling like the “cool” one in the family, she walked right into a precarious situation with Gabe and Max.

On the next episode of Finding Carter, Gabe, still smitten from his time in the closet with Taylor, asks her out on a date and she ends up saying yes, despite the fact that she went home with Max. The two aren’t official and didn’t have sex that night, but he’s understandably deflated when she tells him that she’s going out with the popular jock. Yet Max won’t say anything to her about it, since he’s not the best at expressing his feelings and he doesn’t want to be the one to stand in the way of her happiness, not when the two don’t have any status on which to lean. There might be feelings there, feelings that were manifested on the night of the party, but until one of the two actually verbalizes what’s between them, they’re going to be at this weird stalemate where they’re wondering why the other isn’t making a move. Will Max wait too long to say anything to Taylor and lose her to Gabe for good?

Elsewhere on Finding Carter, Carter reveals her feelings for Crash.

Should Taylor explore her options or would she be better off getting together with Max? Why is Carter allowing herself to give in to her feelings for Crash? Could her jealousy over his hookup with Bird and Taylor’s newfound independence be influencing her decision-making?