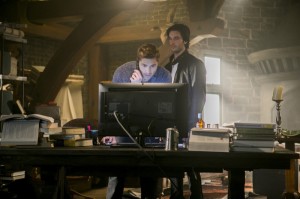 Dash nearly killed Killian due to the spell he mistook for a protection spell. Thanks to Ingrid, though, he was able to bring his brother back and get the opportunity to make up for what happened in the boatyard, even if Killian still doesn’t know what was responsible for his sudden trip to Santo Domingo. Watching Killian waste away, even if it was for a short time, should have put Dash off of magic for quite a while, seeing as how he still has no idea how to control his powers. He would be able to get to pick Ingrid’s brain while she taught him how to be a warlock, but that’s not enough for Dash, not after tasting the type of power held in the Gardiner family grimoire. But what type of consequences will this latest spell that he conducts have? And what happens if it puts someone he loves in danger?

Sunday, August 10th – “Boogie Knight”
Freya relives one of her past lives with Killian; Dash conducts a spell at work without realizing the consequences; Joanna seeks the help of an old friend; Wendy and Frederick try to stop the Mandragora.

Sunday, August 17th – “When a Mandragora Loves a Woman”
Joanna and Alex try to put their past aside to focus on finding the Mandragora. Meanwhile, Freya asks Dash to help save Ingrid; Wendy becomes wary of Frederick’s loyalty.

Do you think that Ingrid will be able to help Dash control his powers? Will Freya reliving one of her lives with Killian provide her with comfort in this trying time? Should Wendy be wary of Frederick’s loyalty after what he did to Ivar?