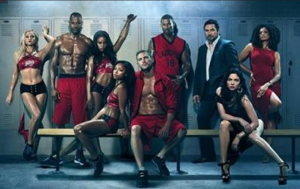 During the live East Coast airing of the tenth episode of Hit the Floor’s second season, VH1 announced that the dance team drama would be returning for a third season.

SO EXCITED to announce #HitTheFloor will be coming back for a 3rd season!! #HTFSeason3 pic.twitter.com/n7wObb3yMe

Created by James LaRosa (Shank!), Hit the Floor follows the Los Angeles Devils, a professional basketball team with more action going on off the court than on. Season two of the primetime soap, which became VH1’s scripted centerpiece following the cancellation of Single Ladies, has focused on the love trapezoid that includes Devils coach Pete Davenport (Dean Cain) and Devil Girls director Sloane Hayes (Kimberly Elise), as well as the continued rivalry between Devil Girls Ahsha Hayes (Taylour Paige) and Jelena Howard (Logan Browning) and how the mysterious death of a former Devil Girl ties into the suspicious death of former Devil Girls director Olivia Vincent (Charlotte Ross).

As was the case last season, it’s as yet unclear who will make it to the next season of Hit the Floor. Tensions on the Devils squad could leave Zero out in the cold, assuming Terrence and Derek’s rekindled relationship holds pat, while Sloane and Raquel have been gunning for Oscar, Kyle’s edging dangerously close to the lifestyle that got Mia killed, and emotionally volatile Lionel might not be able to handle being around the Devils organization if things work out for Pete and Sloane. But if there’s any constant in Devils Nation, it’s that anything can happen and the one person you thought would always be there could be gone in an instant.

Hit the Floor airs Mondays at 9:00 on VH1. The third season of the series, which will feature 10 episodes, should premiere in the spring of 2015.

Will you be watching the third season of Hit the Floor? What type of event would you like to see the season structured around? Of the current characters floating in and around the Devils universe, who do you think is in the most danger of not making it to season three?