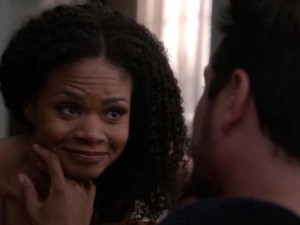 All things considered, Sloane has done a fine job in keeping her investigation into Oscar’s doings under wraps. Whenever she’s landed in trouble or gotten caught, as was the case with Raquel and Jude, she’s been able to wriggle her way free and continue pushing forward, her eye on securing the justice that the Devils owner has evaded for decades. However, the further Sloane goes down the rabbit hole, the more danger she’s putting herself into and the more important each successive move will be, meaning that one hesitation, one wrong guess and she could be in hot water.

On the next episode of Hit the Floor, Sloane goes snooping around Olivia’s mansion, thinking that she has free reign with Olivia gone and Chase locked away. Gone are the crime scene tape and the prying eyes of the Vincent neighbors, but for the first time in her investigation, Sloane got sloppy and allowed herself to be exposed. What she didn’t count on was someone else being in the house at the same time – in this case, Chase, who managed to get out of jail even after signing the plea deal from Oscar. If Chase was the one to kill his wife, Sloane is trapped in a dark mansion with someone with a violent streak and a reason to stop her investigation dead in its tracks; if Chase was innocent, though, Sloane might have an ally in her quest to bring Oscar down, which would give her yet another weapon that she could use to strike the killing blow against the Devils owner. But will Chase point her toward evidence that she can use to A) prove that he wasn’t the one who killed Olivia and B) connect Oscar to Mia’s death and get him sent away for good?

Elsewhere on Hit the Floor, Jelena makes an unexpected decision, while Ahsha receives a big opportunity, German gets roped into doing an interview with Kendall, and Lionel faces her worst nightmare.

How do you think Chase was able to get out of jail? Will German let something slip while at his interview with Kendall? What type of decision do you think Jelena makes that catches everyone in Devils Nation off guard?