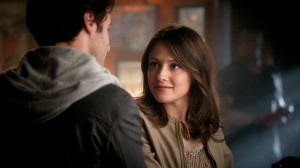 ABC Family has announced that the series premiere of Chasing Life will be made available through different outlets ahead of its television premiere. The episode was released on the WATCH ABC Family app (available for free in the App Store, Google Play, Amazon App Store, and the Windows Store) May 27th, where it will be available to watch through June 9th. Additionally, the pilot will premiere On Demand on June 3rd and the Chasing Life Facebook page June 8th.

Adapted from telenovela Terminales, Chasing Life follows 20-something aspiring journalist April (Italia Ricci), whose life finally seems to be coming together. She just landed an entry-level job at her dream newspaper, putting her that much closer to becoming the writer she always wanted to be; her family is showing impressive resiliency after the death of her father, an event that caused her younger sister to go down the wrong path for a while; and a work flirtation with the paper’s Arts and Entertainment writer might be turning into something real. But all of that takes a backseat when, after an unexpected hospital visit, she learns that she has cancer.

The series premiere of Chasing Life is set to air Tuesday, June 10th at 9:00 on ABC Family. You can check out sneak peeks from the premiere here.

Will you be watching Chasing Life? How do you think April will react to her cancer diagnosis? Should she be forthcoming with her family, friends, and co-workers or should she keep this information close to the vest for a while, if only to process it and strengthen her resolve against the disease?