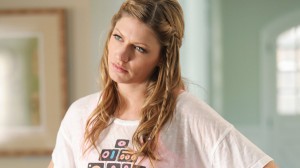 Joss has always been the flighty social butterfly of both her family and her group of friends, the colorful wild child who never wanted to settle down and who followed her id in ways that frustrated and impressed those she loved. However, after years of playing that role, she’s begun to grow weary of never being respected, of people thinking of her as shallow, of not seeing the personal growth and achieving the fulfillment that she wants in her life. Using Savi’s accident as motivation to get herself together, Joss has decided to leave the world of real estate behind to become an event planner.

On the second season premiere of Mistresses, Joss meets with potential client Soleil Moon Frye and assures her that she’s developed an aptitude for multi-tasking and can handle the rigors of putting an event together. It harnesses what were once Joss’s weaknesses and channels them into something productive and something that she could conceivably make a living at, since she’s well-connected through her time in real estate and knows how the elite in the city move and operate. But as socially evolved as Joss is and as in her wheelhouse as event planning is, she can’t do this alone, not when she’s new to the field, so she’s going to have to call on someone like Harry to help get her feet wet. Is this the way that the two will repair their relationship after everything that happened in season one?

Elsewhere on Mistresses, Karen struggles to move on after the personal and professional setbacks she suffered months ago, while an old friend of April’s returns to town and gets her to shake things up and Savi finds herself at a crossroads now that her physical injuries have healed.

Do you think Joss will flourish as a party planner? Are you in favor of the eight month time jump the show will be taking? Where will Savi decide to take her life now that she’s recovered from the car accident?