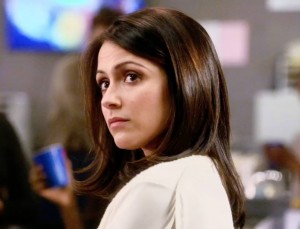 April has been living her life as normally as possible since she received her diagnosis. Despite the fact that she’s looking into fertility doctors and edging her way toward chemotherapy, she’s still getting up every morning, going to work, and trying to maintain some type of routine in a life that could take a left turn at any minute. It might not be an ideal way to live, this laser-like focus on the professional with no room for anything spontaneous, but it’s something that has helped her thus far and something that she doesn’t feel comfortable in backing away from.

On tonight’s episode of Chasing Life, April gets a wake up call when a friend from her cancer support group takes a turn for the worse. Her focus had been so heavily on keeping the normalcy in her life that she’s not fully accepted the fact that she’s living on borrowed time, that all this worrying and planning could be for naught if the chemo doesn’t work. April has always been a forward thinker, someone whose primary goal is to make the future better even if it means suffering a little in the present, yet she cannot afford to give away much more time, not when she doesn’t know if she’ll emerge from chemo the same person. As such, she decides to do something completely out of character and blow off a particularly nightmare-ish assignment at work in order to spend time with Beth, though will this day of fun end up helping her mental state? Or will it only remind her of what she could be giving up thanks to her diagnosis?

Elsewhere on Chasing Life, April finds out something endearing about Leo, while Brenna travels to Miami on a school trip and uses the opportunity to seek out Natalie Ortiz.

Will April feel better after blowing off her assignment and spending some time with Beth? Now that Dominic is off in Paris covering the Daft Punk tour, is April going to grow even closer to Leo? How will Brenna react to the possibility of meeting her half-sister?