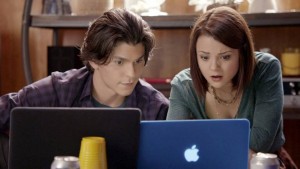 Though Taylor was already uncomfortable with how invisible she was in her own life, it wasn’t until Carter arrived that she was able to gain the strength to do something about her situation. Granted, she’s still not exactly Miss Extroversion, but she’s made progress from the prim and proper girl she was when her sister came back into her life, a girl who was terrified of stepping outside the boundaries that her parents had laid out for her. That progress has gotten her more used to the idea of going against convention and of pursuing what she wants rather than what she thinks others would expect her to want.

On tonight’s episode of Finding Carter, Taylor joins Carter and her friends at a party and ends up in the closet with Ofe as the group was playing Seven Minutes in Heaven. Taylor is so desperate to shed some of her innocence and impress Carter with her more daring side that she’s willing to make out with a stranger, not because she’s attracted to him but because of what kissing him would mean. It would mean that she was just as cool as Carter, that she wasn’t some stick in the mud that would derail any fun that the group would have. It would mean that she was someone willing to take chances, to go outside of herself and experiment until she figured out what works for her. It would mean that she wasn’t as much like Elizabeth as Carter believes she is, something that could pave the way for the two to have the sisterly bond that has been lacking since Carter came home.

Will Carter bonding with Elizabeth further complicate her feelings for Lori? How long will it be before Lori makes her presence known to Carter? Do you think that Taylor will inadvertently let things go too far with Ofe?