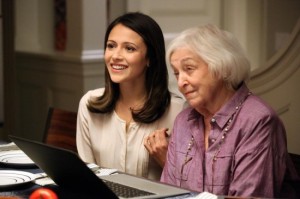 It’s taken a lot for internal, perfectionist April to reach out to those she loves in her time of need. For years, April’s always done the right thing, said the right thing, and never caused a hint of trouble; she made everything look easy and became the type of low-maintenance friend, daughter, sister, and lover that she thought everyone in her life wanted. However, no one wants her to spend this vulnerable, emotionally draining time by herself and she’s had to re-learn that with every member of her inner circle. It’s okay to be sick and it’s okay to ask for help, but in April’s most trying time, who will she reach out for and how will that impact the other people in her life?

Listed below are the dates, titles, and descriptions of the final two episodes of Chasing Life this summer.

Tuesday, August 5th – “What to Expect When You’re Expecting Chemo”
With only a few days left before April has to check herself into the hospital for aggressive chemotherapy, April is determined to live as normal a life as ever. But as she has to deal with Leo drama, Beth falling apart, and trying to live under the hovering eye of Sarah, April quickly learns that nothing will ever be “normal” for her. Meanwhile, Brenna tries to juggle time with Kieran and Greer.

Tuesday, August 12th – “Finding Chemo”
April begins her battle and month-long hospital stay with mixed emotions. Her resolve to fight starts to wane as her treatments take a toll. Not sure she can be cooped up in the hospital for much longer, April begins to panic. With her family by her side, April makes a surprising outreach to someone who may be the only person who can help her. Meanwhile, Dominic returns to a much different April then when he left.

Chasing Life airs Tuesdays at 9:00 on ABC Family. The series will return for a Christmas episode during ABC Family’s 25 Days of Christmas holiday event before beginning the second half of its first season this coming January.