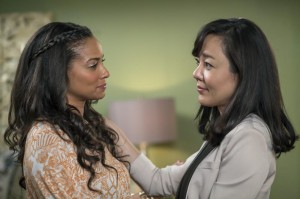 April has only recently shaken off the experience of Paul returning to her life and her entire marriage being cast in a different light. While her first foray into the dating world since things ended with Richard and Paul left town didn’t go so hot, it was still a positive step for April, as she got back out into the world and didn’t allow herself to ignore the side that needs love, the side that was feeling especially lonely in recent months. But just as April thought that her past was completely behind her and that she was making the type of forward momentum that could only lead to positive things, she’s forced to realize that she’ll never escape her former life and that she’s still at the mercy of the decisions of others.

Monday, August 4th – “Coming Clean”
A shocking phone call brings April’s past back to haunt her. She’s even more rattled when it appears that a strange man is shadowing her every move. Savi takes Joss’s advice and reaches out to her long-absent dad (guest star John Heard). Karen struggles to get Anna to open up and tell the truth, and Toni has some news for Dom.

Monday, August 11th – “Charades”
April learns the identity of the man who has been stalking her (guest star Jason Gray-Stanford). Karen blurs doctor-patient boundaries when she offers a helping hand to Anna, Toni’s hidden agenda becomes clear and has a devastating impact on Savi and Dom and when Scott takes Joss home to meet his big, extended family, Harry plants some seeds of doubt that she might not measure up.

What do you think Toni’s hidden agenda with Dom and Savi is? Will Joss be able to get Harry out of her head long enough to impress Scott’s family? Is Savi going to regret seeking out her father after all these years apart?