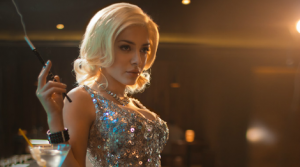 TVLine is reporting that Elena Satine (Marvel’s Agents of SHIELD) has joined the upcoming fourth season of Revenge. She’s set to recur as Louise, the slightly unhinged black sheep of a prominent Southern family who arrives in Emily Thorne’s world through interesting circumstances.

In addition to her role on the ABC comic-inspired drama, Satine has appeared on the likes of Magic City, Matador, and Smallville. Among the other new additions to the Revenge cast for next season are Brian Hallisay (The Client List) as a local cop who befriends Jack and James Tupper (Mercy) as the decidedly un-dead David Clark. The latter had been recurring for the first three seasons of Revenge and only appeared through flashbacks before popping up in the present day Hamptons in the third season finale.

The fourth season of Revenge premieres Sunday, September 28th at 10:00 on ABC. You can check out the rest of ABC’s fall 2014 premiere dates here.

Will you be watching the fourth season of Revenge? Which main character do you think will serve as Louise’s conduit into Emily’s world? Could Louise wind up being an asset to Emily’s quest for vengeance or will her unpredictable nature force Emily to take her out?