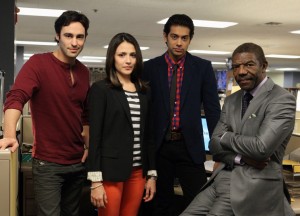 20-something April seems to be on the right path. After dedicating her life to her studies, she’s landed an entry-level position at a fairly prestigious newspaper, while she’s managed to snag a date with Arts & Entertainment reporter Dominic and her family has rebounded nicely from the loss of their patriarch, with her troubled younger sister cleaning up her act over the past year. It should be the prime of her life, a culmination of her hard work and some lucky breaks set up for her to enjoy the fruits of, but one thing’s stopping her – a recent cancer diagnosis.

On the series premiere of Chasing Life, April goes to her estranged uncle in hopes of using his connections to get an interview at a local blood drive. It’s not the sexiest story, but it’s something she can take to her editor to show that she’s a serious reporter with initiative and a distinct voice. However, April soon lands in the hospital where she learns from her oncologist uncle that she has cancer. April now must face her mortality at an age when dying should be the last thing on her mind and decide how she wants to go about handling her diagnosis; technically, only one person in her life knows that she has cancer, so she could conceivably hide the results from her family and continue working until her health dictates that she pump the breaks. But with how close she is to her family and how many people she interacts with on a daily basis, is it really feasible to attempt to hide something like this and think that no one will notice the changes in energy, pallor, and outlook that she’ll experience?

Will you be watching Chasing Life? How do you think April will handle her diagnosis? When will April decide to let her family in on her big secret?