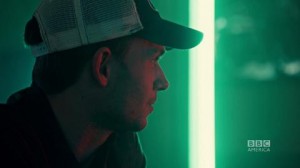 Sarah has been given time by Dr. Leekie in which to find Professor Ethan Duncan and look into the origins of the clone experiment, including what exactly went on with Project LEDA. While it looked like an unusually passive gesture by the ever-calculating scientist, letting someone like Sarah wander over yonder without concern for any possible escape or the information she could uncover, Leekie made sure to cover his bases by having Paul trail her. Sarah might get closer to the truth about her beginnings than ever before, but even if she does manage to find the Duncan-shaped needle in the haystack she’s currently residing in, she’ll have to deal with quite a few obstacles before she can make it back alive.

On the next episode of Orphan Black, Sarah and Helena hit the road in Siobhan’s truck and head out searching for answers about the origins of the experiment and the location of Swan Man. Of course, it’s not as easy a journey as either would’ve liked, as they run up on mysterious strangers and have a series of altercations that eat up valuable time and energy that could be used in a more productive way. And there’s still the matter of Paul lingering in the shadows, under the thumb of the Dyad Institute and having to decide just how far he’s willing to go when it comes to obeying Rachel.

Elsewhere on Orphan Black, Cosima and Delphine make a discovery that could be the key to treating the former’s illness, while Allison runs into Vic in a group meeting.

Will Sarah and Helena find information about the origins of the clone experiment on their trip out of town? What will Cosima and Delphine find that could potentially help the former’s illness? Could Vic prove to be an asset to Allison while she’s trapped in rehab?