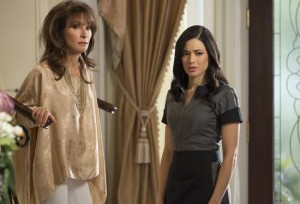 For years, Zoila put Valentina above all else – above her own happiness, above her satisfaction with her profession, above any ambitions she might have developed while working for Genevieve. It might’ve been the best thing for her daughter, especially since Zoila continued to drill into Valentina the idea of pursuing your dreams and reaching for the brass ring, but it led to a long period of Zoila shutting off parts of herself and developing tunnel vision. She couldn’t worry about other aspects of her life when she had a consuming job and bills to pay, but with Valentina and Pablo both out of the house for very different reasons, Zoila has the opportunity to begin working on herself for once.

On the next episode of Devious Maids, Zoila goes out on her first real date since separating from Pablo. Although she’s not exactly itching to move on from her marriage, she knows that her husband is already doing so and she doesn’t want to be left behind, dirty rag in hand. Zoila wants to find the fulfillment and happiness that has eluded her for so long; she might not have realized just how deteriorated her marriage was, but the shakeup was what she needed to fully realize just how much she’s neglected herself in the name of her daughter. But with Genevieve already meddling in Valentina’s relationship with Ethan, will Zoila get the time she needs to explore what she wants and who she wants to be with?

Elsewhere on Devious Maids, Marisol discovers incriminating secrets about Opal’s past, while Carmen prepares for a performance and Rosie ends up causing more strife in the Miller family when she tries to help Lucinda.

Do you think Zoila will allow herself to have fun on her date? What will Marisol find out about Opal that’s so damning? How long will Rosie last in the Miller household if she’s continually in the eye of the storm?