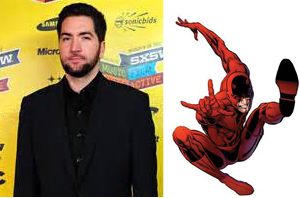 There’s upheaval in the Marvel-verse.  One day after director Edgar Wright left Marvel’s Ant-Man over creative differences, Drew Goddard has stepped down as showrunner of the superhero studio’s Netflix series Daredevil.

In addition to serving as showrunner and executive producer, Goddard was supposed to write and direct the series’ first episode, which is set to premiere on the streaming site next year.  Goddard will now serve as a consultant for a series, but most of his focus will be set on writing and directing Sony’s upcoming Spider-Man villain-focused spinoff, Sinister Six.

DeKnight has previously served as shorunner of Starz’s Spartacus, and has worked with Joss Whedon’s Buffy the Vampire Slayer and Angel.  He is also credited as a co-executive producer and writer on The CW’s Smallville.

Aside from the Daredevil series, the deal between Netflix and Marvel also includes adaptations of three other comic book series: Jessica Jones, Iron Fist, and Luke Cage.