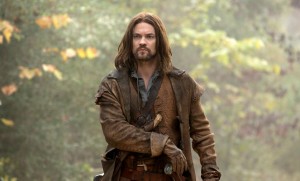 WGN America has announced that Salem, its first original scripted series, has been renewed for a second 13-episode season, which will begin production later this year for a 2015 premiere.

“At WGN America, we are committed to delivering compelling, brand-defining programming rich with fascinating characters and Salem has done just that,” said Matt Cherniss, President and General Manager, WGN America and Tribune Studios.  “Brannon Braga, Adam Simon, the talented cast and our great partners at Fox 21 have opened up an intriguing world that has captivated viewers.  We look forward to bringing more great storytelling, scares and surprises to viewers as the saga unfolds.”

Starring Shane West (Nikita), Janet Montgomery (Made in Jersey), and Ashley Madekwe (Revenge), Salem reimagines the infamous Salem Witch Trials – only if the witches actually existed. The series premiere of the genre drama earned more than 3.4 million Total Viewers and 1.5 million Adults 18-49 in time-shifted Live + 7 viewing, with the series averaging nearly 1.7 million Total Viewers and 806,000 among Adults 18-49 through two telecasts. That marks a +776% increase over the network’s Adults 18-49 season-to-date average on Sundays at 10 p.m. ET. The network will premiere its second scripted series, a drama about the Manhattan Project, this summer.

Salem airs Sundays at 10:00 on WGN America. You can check out a preview of tonight’s episode below.

Have you been watching Salem? Do you think the show has progressed or regressed since its pilot episode? Where do you think a show like this will go during its second season?