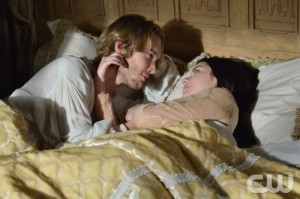 Bash has only ever had himself and his mother to rely on, with Henry and Catherine putting Francis above him whenever possible. It’s helped him become independent and strong-willed enough to where being banished from the castle wasn’t a death sentence, but he’s always carried around that need to belong and the abandonment issues that accompany said need for companionship. As luck would have it, he found someone in the middle of the Blood Wood who could serve as a proper companion in Rowan, which makes her family being marked for pagan sacrifice all the more pressing.

On tonight’s episode of Reign, Bash strives to protect Rowan and her family from the pagans in the woods and vows to expose the truth behind the Darkness that resides among them. For years, he’s heard about the Darkness, yet he’s never witnessed it with his own eyes; in order to find a way to save Rowan, he’s going to have to go deep into the woods and face the Darkness for the first time, which is an admirable mission but not necessarily a situation where he’s guaranteed to escape with his life. However, above all else, Bash wants answers to the questions he’s harbored about the Darkness and that can only be accomplished by dealing with his problem head on rather than hiding and hoping whatever’s controlling the woods goes away. He would gladly give his life so that he can know the truth about the pagans, whose beliefs he shared once upon a time, and protect someone who he’s grown to care about greatly in the short time since they met, a far more noble death than being slaughtered in the woods by Francis’ guards.

Elsewhere on Reign, Mary is disappointed that Lola refuses to participate in an annual castle tradition, while Kenna confides in Catherine about her concerns over Henry.

Will Bash be able to confront the Darkness in the woods and save Rowan’s family? Do you think Mary’s anger regarding the pregnancy will be more toward Lola or Francis? Can Catherine figure out what’s causing Henry to be as erratic as he’s been these past few episodes?