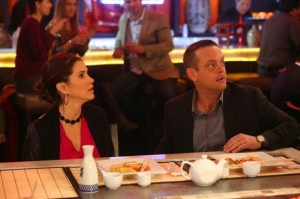 At the end of a long week, Marty and Debbie realize they haven’t said a complete sentence to one another since the week before, as this past week was all Jimmy Kimmel and blueberry Pop Tarts. Debbie gets worried that she ad Marty are drifting apart, thanks to the women’s magazines that she reads, and reminisces about the times when they were dating where they would stay up and just talk to one another. After mentioning that they were just intimate two Thursdays ago, in between a Scandal clip show and a new episode of Scandal, Marty suggests they do a date night where they can focus on each other. He offers to plan everything out and the following day, he books a dinner reservation in the city for the two of them.

When Amber rejects the idea of babysitting Max and Abby, the Weavers decide to call in their babysitter Pearl, just as Larry and Jackie come over. Marty lets slip that he and his wife are in a rut and the two explain the definition of a rut, something that the Bird-Kersees aren’t familiar with. That afternoon, as Jackie paints a portrait of Dick, one in a series that shows him through the centuries, Larry comes in to worry about whether they’re actually in a rut like the Weavers. He read the same magazines that Debbie does, as well as Cat Fancy, and cites that being in a rut is one of the top causes of divorce; Larry goes in for a fist bump with his wife as a way to confirm that they’re not in a rut, only she tuned him out while he was talking about what he read. Instead, he hits her arm and causes the brush to ruin the painting.

The Bird-Kersees split up and chat with Weaver of the corresponding sex, but they get conflicting reports on what they should do to get out of a rut, as Marty is taking Debbie to a loud, fancy restaurant with impressive lighting and three DJs and Debbie expresses to Jackie that she just wants a chance to talk to her man. Larry and Jackie return home where Jane suggests they use Google to find ways to spice up their marriage; after getting distracted by Google’s “did you mean…” feature and ended up on pictures of babies and puppies, the Bird-Kersees decide to role play and dress up as the sexiest people they know for a date night of their own. Reggie and Jane are planning their own date night, so Dick is forced to go over to the Weavers and stay with Max and Abby. Though the idea of having a babysitter initially frustrates him, Dick gets over it when he sees Pearl, the Weavers’ 42-year-old babysitter. He’s instantly smitten and hurries the Weavers out the door so he can begin flirting with Pearl.

Meanwhile, Marty takes Debbie to Lou Ferrigno’s Hibachi Heaven – not exactly the place she was looking to spend her date night. It’s loud, there’s no room to move, and they sit around the grill as the chef prepares their food, meaning that Debbie’s plan of using conversation cards to stimulate talk between her and Marty is over before it can begin. Back at the Weavers’ home, Pearl dining on raw Ramen noodles is a major turn-on for Dick and when he gets Abby and Max to put themselves to bed, he goes in for the kill and begins flirting with Pearl, who offers him sanitizer that she stole from her gynecologist. However, when he approaches her again in the living room, looking for her current story and asking her to go steady, she breaks it to him gently that she doesn’t want to cross that line and that she’s going to have to say no.

Larry shows up to the bar at Lou Ferrigno’s dressed as Jackie, the sexiest person he could think of, and thought he hopes Jackie arrives at Adam Levine, she opts to dress as him, which excites Larry immensely. The two begin exchanging compliments about one another and while Larry compliments his/Jackie’s skorts, she draws his ire when she mentions his smile and how he thinks everyone’s an idiot. Larry critiques her again when she mentions his hair and lashes out by making fun of the way she says “Debbie Weaver”‘; Jackie retaliates by insulting Larry’s occupation and leaves to find the Weavers. Debbie is having a difficult time getting Marty to pay attention to her and informs him that she feels irrelevant on her own date night, just as Jackie comes up asking for a ride home and Larry arrives shortly after complaining about being in a rut.

The two couples go by the bar and Larry and Jackie figure out that they’re not actually in a rut. They just let the Weavers and the magazines Larry read get into their head, so they decide to go home together, all the while Max and Abby comfort an obviously crushed Dick as he sits outside. Although he’s heartbroken, he knows he’ll be okay. Marty and Debbie arrive home and realize that talking for hours on end isn’t their thing anymore, not with three kids, a lack of new stories, and Marty’s job keeping him from coming home early enough. However, even though they both accept their reality, this doesn’t mean that they can’t have a little romance and when Marty opens up the door to their bedroom, Debbie finds wine, raspberry twists, and UB-40, all things that were present in a talk-heavy date she brought up earlier. The two lay in bed eating twists and gossiping about Larry’s smooth legs.

Additional thoughts ad observations:
-“You gave up booze for nine months for this one.”
-“I look like Marcia Cross.”
-“I don’t know how to bust a rut.”
-“I don’t know why we barge in there anymore.”
-“All aboard the onion train!”
-“You’re very cute.” “Preach.”
-“Why didn’t you come dressed as Adam Levine?”
-The New York Times mentioned the show, spotlighting its young actors in an article posted today.
-So, this episode name dropped Scandal, Jimmy Kimmel Live!, and The View, with past references to Revenge and an entire episode dedicated to Shark Tank. If The Neighbors gets renewed for a third season, I hope we’re in for a good Last Man Standing joke, particularly if it’s about how incongruous the scheduling has been and how Tim Allen is awful.
-If I could encapsulate this show in one brief sequence, the tag with Reggie and Jane doing pizza delivery role play would be it. That was the Neighbors-iest Neighbors moment this season, I think, and it was delightful.
-Also delightful: literally everything about the Jackie and Larry gender-swap, particularly Toks Olagundoye’s spot-on impression of Simon Templeman’s voice and the way Larry said “Debbie Weaaaaaver.” It was a silly, fun way of bringing in a nice fourth-wall joke and I like how the plot ended believably abrupt, with the two realizing that it was all in their head and their recent spat validating just how strong their relationship actually is. Olagundoye and Templeman have the best chemistry of any two-some in the cast and anytime the reality around them is heightened (see: them being in drag), it makes every scene electric.
-Very sweet ending to the episode. I think the show has done well by Marty and Debbie this season after sometimes losing them in the fold last season.
-Dick’s plot felt like part had been cut for time. Although I’m always in the mood for some Dick (Butkus), this was a bit too slight and verged on filler-y, despite the presence of the always game Rachel Dratch. This felt like something that could have been a centerpiece of another episode or at least a strong B-plot, whereas it was relegated to a minor C-plot role here and squandered some potential.
-Pearl eating raw Ramen was both gross and incredibly impressive. She really earned my respect by pouring the flavor packet directly into her mouth – you’re a stronger lady than I, Pearl. Also, someone get Rachel Dratch a sitcom because she is too talented to be relegated to guest parts.
-I like how Jane is always just…around. Like she’s floating on a speck of dust, just waiting for Reggie to need her for something.
-Speaking of, very cute tech joke this week with the Go-ogle sequence. Although I know the show has some budget issues, I wish they could incorporate more first time experiences like that for the Bird-Kersees similar to those of season one.
-Abby was on a call and couldn’t meet with Larry and Jackie to discuss marital ruts. A call with Horsey, perhaps?
–Next week on The Neighbors: Debbie’s estranged mother invites the Weavers to visit her time share in San Diego, while Marty helps Abby overcome her fear of the ocean.