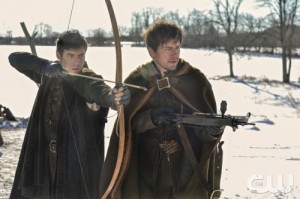 There’s certainly no love lost between Bash and Francis after the botched attempt to change the line of succession and Mary’s decision to pursue her feelings for the latter rather than the potential of something with the former. The two were already not especially close due to Francis’ resentment of Bash getting to live his own life and Bash feeling like the black sheep of the family, so everything with Mary just exacerbated their issues and magnified their dysfunctional dynamic on a grander scale. That heightened state that the brothers had been living in since Mary made the decision to claim England’s throne with Bash, as well as the final conversation he had with his brother before leaving the castle, has made the bastard brother very suspicious of the attempt on his life. Could Francis have been behind it?

On tonight’s episode of Reign, Bash suspects that Francis was behind the failed hit since it was Francis’ men who made the attempt on his life. Rather than leaving that as it were and heading to Spain to start a life away from the pressures of court, Bash has opted to stay around France, possibly to prove that Francis was the one who masterminded the hit or to exact revenge upon his brother. With nothing in the way of support from his family, Bash won’t exactly be returning to court and attempting to live among the royals as if nothing happened; instead, he’ll be lurking in the shadows and around the woods, gathering the information necessary to inform his next major decision. If he finds that Francis was indeed behind the hit, there could be war brewing between the two brothers, but if Francis had nothing to do with it, Bash might be able to get Mary to leverage her power to punish the one responsible or secure him a protected position at court.

Elsewhere on Reign, Henry’s odd behavior causes misfortune in the kingdom, while Bash encounters an escaped victim of the terrors of the woods and Catherine offers advice on conceiving children to Mary.

Do you think Francis was behind the attempt on Bash’s life? Why has Henry’s behavior become so odd recently? Will Catherine’s advice help Mary conceive her first child with Francis?