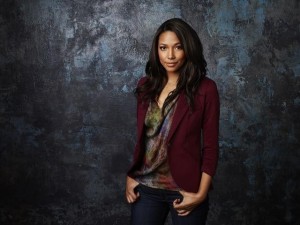 Since Danny returned from the woods, he’s been deliberately pushing Lacey away in a bid to protect her from getting too close to him, straining their relationship almost to the point of snapping it in two. Lacey assumed that when Marilyn was arrested for Regina’s murder, things could return to normal (or the version of a normal life that Danny has been dealt) and she could see where things with her childhood crush could go now that they were able to be together in public. However, now that Danny has another secret to keep from her, Lacey has found herself mostly alone and lacking anything in the way of a supportive shoulder to lean on during a difficult moment in her life. Which is what would make her such an easy target for someone with an ax to grind.

Tuesday, March 11th – “The Son Also Falls”
Jo bonds with Charlie and realizes that she needs to move on with her life without Danny. Jo surprises everyone, including herself, when she decides to run for student body president, which complicates things with Rico, whose girlfriend Andie is also vying for the job. Danny is still haunted by Vikram, and Lacey, knowing something is up, confronts him about what he’s hiding. Jack’s daughter, Whitney, who has returned to Green Grove after being kicked out of boarding school, encounters Karen and strikes up a quick friendship with Lacey.

Tuesday, March 18th – “You’re a Good Man, Charlie McBride”
As Jo gets closer to Charlie and learns more about his and Danny’s time in juvenile hall, Danny’s concern mounts. Karen gives Danny some powerful advice on turning his life around. Meanwhile, Whitney’s wild side starts to rub off on Lacey, leaving Lacey uncertain about their complicated new friendship. Karen helps Tess with a personal matter and Kyle turns his suspicions on Jack.

Tuesday, March 25th – “Danny, Interrupted”
With his guilty conscience becoming too much to bear, Danny is determined to uncover the truth about who was responsible for covering up the murder and visits an old confidant for some valuable insight. Jo’s own sense of guilt leads her to question the motives of a friend. Lacey tries to be a good friend to Whitney while struggling to define their complex new relationship. Tess receives some devastating news as she and Kyle try to move on with their lives. – See more at: http://www.screenfad.com/twisted/twisted-spoilers-lacey-confronts-danny-14973#sthash.Gh5geqr4.dpuf

Why do you think Whitney is so quick to strike up a friendship with Lacey? Is Jack who Kyle should be focusing his suspicions on? What could be so damaging about Charlie and Danny’s time in juvenile hall?