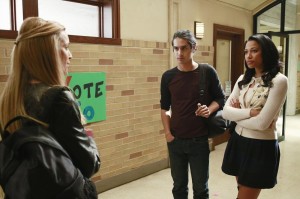 Danny was so confident that Karen was behind the body being moved that he outed himself as being the one responsible for Vikram’s death. Granted, it was understandable that he was as suspicious of his mother as he was, given her exuberance over spending the insurance money and the increasingly close relationship she shares with Jack, but it was an uncharacteristically candid moment from a boy who has kept everything close to the vest since he returned home from juvenile hall. And in that moment of openness, of laying it all out on the table, he managed to incriminate himself and invite questioning from Karen about what the heck happened in the woods after he ran off

On the next episode of Twisted, fallout from Danny’s confession to Karen begins, but it’s not Karen who comes down hardest on him. While she reveals that she had nothing to do with the body being moved and the accident being staged, instead pointing the finger at Jack, it’s Jo who delivers the strongest blow against Danny when she reveals that she wants to try living her life without him. She’s getting closer to Charlie and putting herself out there by doing things like Homecoming committee and she doesn’t want to be around for any other Danny drama to develop, especially not when she knows that he and Lacey are trying to make things work romantically. Jo  was roped back into Danny’s life after everything that happened with Vikram, but now that that’s over, it seems that Danny has not only lost a father out in those woods, he lost a friend, too.

Elsewhere on Twisted, Jo’s decision to run for student body president puts her at odds with Rico, while Danny continues to be haunted by Vikram and Jack’s daughter Whitney returns from boarding school and quickly makes friends with Lacey.

Do you think Jack is the one who helped move Vikram’s body? Should Jo already be distancing herself from Danny? What type of trouble will Whitney bring to Green Grove?