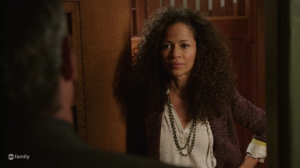 When Lena and Stef first approached Callie with the idea of adoption, she didn’t exactly welcome it with open arms. Though her rationale had to do with the kiss and protecting Jude from losing such a positive living situation, part of what motivated Callie was her poor experiences in past foster homes and her reticence at allowing herself to be vulnerable toward and lean on Lena and Stef. Callie’s had to be tough for so long that her defenses are seemingly permanently up; even though she knows Lena and Stef have given her the most loving, stable home situation that she could ask for, there’s still a voice in the back of her head that won’t let her finally exhale, that keeps telling her that the other shoe is bound to drop anytime soon. But will Callie be able to suppress said inner voice and allow herself to be adopted by the Fosters?

Listed below are the dates, titles, and descriptions of the final three episodes of The Fosters‘ first season.

Monday, March 10th – “Don’t Let Go”
An encounter with her father (guest star Jamie McShane) leaves Callie conflicted about her future and worried about the effect the reunion will have on Jude. Meanwhile, Jesus struggles to maintain his focus at school without his ADHD medication, and Mariana gets an unexpected invitation from Zac’s mom. Lena and Stef come to a major decision with the help of a good friend.

Monday, March 17th – “Metropolis”
As the high school’s Winter Ball approaches, Mariana and Jesus fret about dates and a surprise nomination for Winter Queen raises suspicions. Zac’s mom shows up at school to talk to Lena. An old friend pays a visit to Callie wanting to make amends, and Brandon feels threatened. But a past mistake could cause Brandon to lose Callie for good. Ana returns with unsettling news for Stef.

Monday, March 24th – “Adoption Day” (Season Finale)
Stef and Mike are faced with the repercussions of a shocking revelation, and the fallout could destroy lives and relationships. Callie contemplates her upcoming adoption and Brandon’s frustration leads him to make another regrettable decision. Mariana supports a friend with a difficult decision, and Jesus resolves to make a change for the better as he manages his ADHD. Jude gets asked out on a date.

Will Callie end up getting adopted by Lena and Stef? How will Jesus decide to manage his ADHD? Who will ask Jude out on a date?