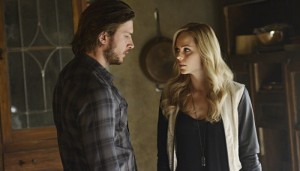 Rumors have been spreading about how weak the Pack is and how Jeremy isn’t the type of Alpha to be feared. For years, the Mutts have been made to live under the rule of the Pack, becoming second-class citizens without the ability to plant roots or build a life for themselves, and now that they’ve gotten a chance to hit back against the Pack’s tyranny, they’re going to take it, risks be damned. Most vulnerable right now is Jeremy, as the Mutts believe that cutting the head off the Pack is the surest way to watch the underlings crumble, and Clay, Antonio, Nick, and Elena are going t have to circle the wagons in order to make sure nothing happens to him. But if the Mutts do land a crushing blow against the Alpha, how will the rest of the Pack respond?

Monday, February 24th – “Stalking”
The Pack could possibly be walking into a trap when they agree to sit down and discuss a truce with the Mutt uprising and their recently revealed leader Daniel Santos.

Monday, March 3rd – “Prisoner”
A poisoned Jeremy grows weaker by the hour as Elena and Clay race against the clock to save his life, but run into hurdles as they interrogate a Mutt and contend with a werewolf wannabe.

Monday, March 10th – “Vengeance”
The Pack push personal issues aside to focus on survival after Santos sics a notorious killer on them, but Elena’s feelings for Clay race to the surface after her own close call with death.

Monday, March 17th – “Descent”
Elena returns to Toronto for her art show accompanied by Clay, who keeps a protective watch over her while camping out on Philip’s couch. Elsewhere, the Pack receive valuable information about the Mutts from an unexpected source.

Will Elena and Clay be able to save Jeremy? How will Philip handle Elena bringing Clay back to Toronto? What Mutt source will help the Pack in their battle for power?